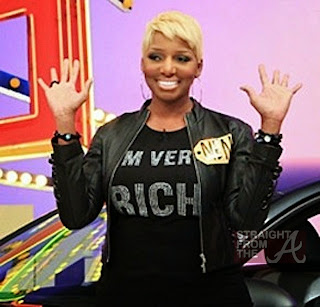 Who am I to say that Nene Leakes from Bravo's "Real Housewives Of Atlanta" doesn't deserve to be on the show, I mean, she is married. However, I do believe for the network to keep hiking up this woman's salary every season, just so she stays on, is quite entertaining. According to CocoaFab's blog, with all the backlash with Nene and the women of the show, she wasn't too interested in returning for a season eight- which I don't believe, but opted to return with the increase in salary.


"Andy Cohen knows a good thing when he sees it and when it comes to ratings Nene Leakes is his queen bee!
But if Bravo wants Nene Leakes to return for season eight of the Real Housewives of Atlanta, they had better show her the money. According to Radar Online, Leakes recently renegotiated her contract at Bravo in order to continue to star in the immensely popular reality series. She is allegedly the highest paid cast member on RHOA, banking an estimated $1.5 million this season. However, she reportedly hated filming with the rest of the crew and was ready to leave the popular franchise.
Leakes tried to mend fences with the girls this season when she invited therapist, Dr. Jeff, to do a group session with the cast. Leakes goodwill attempt ended up being more of bashing session in which Kenya Moore, Cynthia Bailey, Claudia Jordan and even Kandi Burruss went in on Leakes’ mean-girl behavior. She stormed out of the therapy session; similar to how she got emotional and made an abrupt exit off the set of the reunion. Following the taping of the reunion show, Leakes told E! News, “I just left Housewives where I was working with like, six monsters.”
Wow, Nene depicts the women as "six monsters", and I'm not taking sides, but there was a lot of shade thrown around this season from all parties. However, Nene can be working anywhere else right now, so for the network- I guess it's worth it. Smh. Nene is definitely getting rich!!!

http://cocoafab.com/bravo-throws-millions-at-nene-leakes-for-lucrative-new-contract-and-spin-off/
Posted by Hearts desire to heal at Wednesday, April 08, 2015