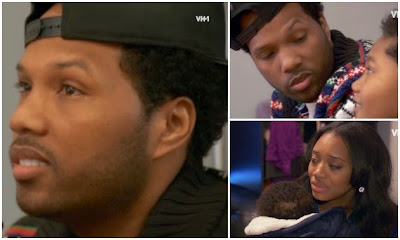 I told you guys I would keep you posted on all things Yandy Smith & Mendeecees Harris, until their wedding day, right. Well, it seems I have to deviate a little from all the wedding bliss. All of us have been wondering with all the baby happiness, and wedding planning, when were we going to hear about Mendeecees legal case- we knew it hadn't gone away. According to Jasminebrand's blog, the "Love & Hip Hop NY" reality star, 36 year old Mendeecess plead guilty on Tuesday April 21st. Eeekkk. "Specifically, he pleaded guilty to narcotics conspiracy and admitted that he was involved in a drug trafficking operation (between 2005 and 2012) that reportedly involved shipping cocaine and heroin to the Rochester region.

"According to reports, his agreement includes him turning over money from his LHHNY television show and all of his paid appearances. His attorney stated that the money which will be paid to the federal government, has totaled more than $103,000. At this point, he is said to be free on a $600,000 bail package. However, he faces a sentence of 8 to 10 years in federal prison and/or a fine ranging from $15,000 to $5 million. He will also face four or five years of supervised release.Mendeecees’ brother Tyrus Harris, previously pleaded guilty and is serving 10 years in federal prison. Mendeecees will remain free on bail until his sentencing, on Aug. 31 at 3 p.m."


Lord have mercy. This definitely puts a damper on flowers, and bridesmaids that I am imagining for Yandy at her wedding. I can't imagine what a woman is thinking right now knowing that the father of your children, and soon to be husband, will face up to ten years in prison. We can't help who we love sometimes, but it's hard dealing with someone who has or had a completely different lifestyle from you. I'm praying for you girlie!